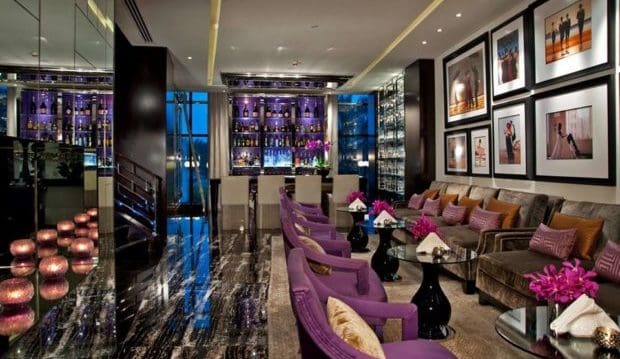 as the name suggests, this culinary steakhouse is headed up by highly acclaimed Michelin-starred celebrity Chef Gary Rhodes. Rhodes Twenty 10 Dubai is located at the Le Royal Meridien Hotel and creates a glamorous and intimate scene. The interiors are sophisticated and features opulent chandeliers, black and just a little lilac.

Backed by Michelin-starred celebrity chef Gary Rhodes, Rhodes Twenty 10 is a Marina-based eatery. It is sleek and ready to welcome clients every day. Along with a lot of style, Rhodes Twenty10 is a  restaurant and bar that has a lot of substance.

is British at heart; with the menu that draws on a number of different cuisines, as exemplified by the starters where burrata and foie gras is served next to barbecue ribs and “Kamikazee Prawn Salad”. The mains at this restaurant showcase British influence coming into its own, with a mixed grill and fish and chips and wholesome options. Those who seek steak can relish the 350-day grain-fed stock yard wagyu silver fillet. The kitchen also prepares USDA sirloin and Australian black Angus rib-eye – both succulent and well seasoned. After quality beef, one might be tempted to have the famous “Giant Jaffa Cake”. It’s a delight mainly for those guests who come for a meal with kids.

is a chef, restaurateur and author. He has more than 35 year career, Gary has mastered the ‘Great British Classics’ that sets him apart. With a history of stunning restaurants, he has won a constellation of Michelin stars and he is revered by his peers as truly ‘The Chef’s Chef’. Famous as an ambassador for British cuisine, Gary Rhodes has achieved a lot more than other chef had previously managed: he reintroduced Britain to its rich gastronomic heritage and served a culinary culture to rival. In 2007 Gary began relationship with the UAE when Rhodes Mezzanine opened at The Grosvenor House Hotel, Dubai. In 2013 Gary opened Rhodes 44 at The St Regis Hotel, Abu Dhabi and the Rhodes @ the Dome brasserie, Plymouth.

The Restaurant at Address Sky View

Carnival by Tresind, A Fun Twist on Indian...