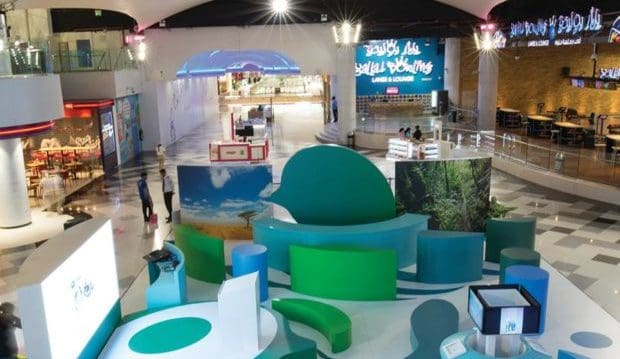 you want to get up close to a mountain gorilla, walk with a herd of African elephants, see our planet from above, experience the ice cold Mt. Kenya or plunge into the deep blue sea – you can do all of that and more at Orbi Dubai. Mixing together SEGA’s innovation and actual footage from BBC Earth, this is the real deal.

Dubai’s latest attraction includes Orbi indoor nature museum – New technology-infused ‘indoor nature museum’ meant to inspire the love of the natural world to visitors. Dubai is famous for various attractions, an indoor nature museum called Orbi is one such space launched at the City Centre Mirdif. This is the edutainment concept that is the result of a partnership between game-maker Sega and BBC Worldwide, and features cutting-edge footage produced by the BBC’s natural history unit. Orbi Dubai is the first of its kind outside of Japan.

y to seen some of the most incredible parts of the earth, and some of the sights they will see at Orbi Dubai. Combining Sega’s technology with the BBC’s content, the Orbi experience allows visitors to get an immersive experience. People get an understanding in close proximity, the life of an elephant by transporting all to Central Africa, or to see the family of mountain gorillas in a BBC Earth location shoot. One can explore the depths of the ocean up close. Animalpedia, is an interactive gesture-control learning experience, while Earth Palette gives a 360-degree screening of the nature films, giving an impression that you are truly in the middle of nature. There are a total of 12 attractions, each lasting between 4 to 22 minutes long.

“The real gem in Orbi Dubai’s crown is the incredible theatre space, Theatre 23.4. This is one of the world’s biggest screens — it is 35 metres across, and 8 metres high, and will give you an incredible visual experience. The first Orbi, launched in Yokohama, Japan, in 2013 was visited by more than half a million guests in its first year, said Damien Latham, CEO at Majid Al Futtaim.

The planning for Orbi Dubai began in 2013, when his team visited Orbi Yokohama. A screening was staged at the British Embassy in Dubai in October 2016, which was appreciated.

Orbi is digitally presenting nature to life, it’s a lot more than just looking into a screen. The experience is enhanced and is much more than a phone or TV. The tactile and sensory notion to Orbi presents all one step closer to nature.

Visitors can look forward to the five of the attractions at Orbi Dubai:
• Animalpedia: A giant interactive screen featuring life-size visuals of animal shapes. Visitors can virtually reach out to an animal on screen and it responds with pop-up facts.
• Earth Palette: A 360-degree visual experience featuring countless images of animals, landscapes and plants.
• Base Camp: Projection mapping to exhibit images captured by BBC Earth on to walls and a standalone sculpture. The sculpture changes character to represent different animals, which interact when touched.
• Time Slice: Immersive attraction where visitors can gauge their abilities in relation to some of the speediest animals on our planet.

• Extreme Photo Spot: A green screen experience encouraging visitors to step into the wild and pose alongside their favourite animals.

A single ticket costs Dh140, while a family ticket costs Dh449. Children below the age of three enter free. Age restrictions on some attractions apply.

The Lost Chambers Aquarium, Explore the Magic in...