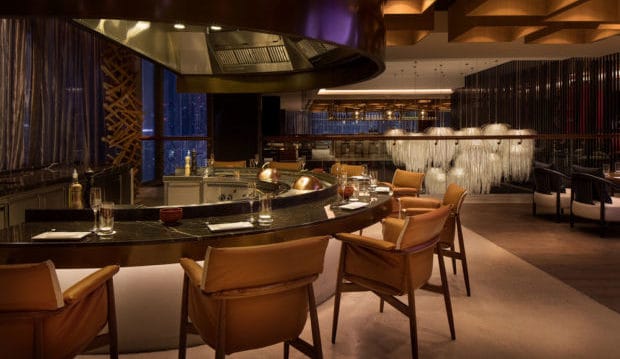 between the culinary traditions of his native Japan and the American palate, chef Masaharu Morimoto brings intense excitement, exquisite technique, and absolutely balanced flavors to thousands of diners throughout the world. He has also garnered critical and popular acclaim for his seamless integration of Western and Japanese ingredients and has successfully created a signature style that positions him as one of today’s foremost chefs.

Morimoto restaurant is located on the 23rd and 24th floor of

Chef Masaharu Morimoto has garnered critical and popular acclaim for his signature style that ranks him as one of today’s foremost chefs. He suffered a shoulder injury which ended a promising career as a baseball catcher in Japan, Morimoto began learning the art of preparing sushi in his hometown of Hiroshima. He was quick in grasping the technique of this exacting food art, and at age 24, he opened his first restaurant.

After five years, he moved to America and expanded his culinary repertoire and explored the opportunities and possibilities he saw for a cuisine that would blend the best of both cultures. In 1994, Morimoto joined the original Nobu restaurant and was promoted to Executive Chef in no time. From there, he decided to open his first eponymous restaurant in Philadelphia in 2001. He made the debut of Wasabi by Morimoto at the Taj Mahal Hotel in Mumbai in 2004, followed by a second Wasabi at the Taj Mahal Hotel in New Delhi in 2008. Then came flagship restaurant, Morimoto New York, opened in 2006.