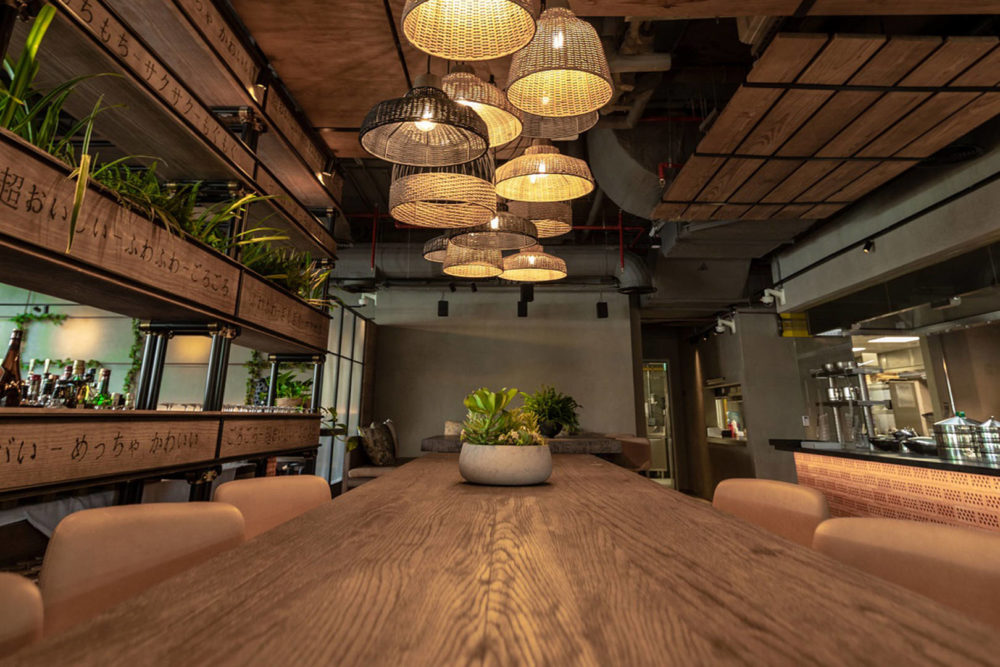 This Pan Asian Kitchen and Bar – Lah Lah is great for anything from after-work drinks, to Friday night out and lazy family lunch on a Saturday. Lah Lah is is a restaurant in the brand-new Zabeel House by Jumeirah hotel and looks very impressive.

The laid-back theme of the restaurant allows guests to relax and enjoy their time. With messages to eat more cake and “hey man” greetings, Lah Lah is all a quirky place. Their industrial-style furniture gives a spacious look. Lah Lah has an open kitchen concept with chef seen working behind the kitchen’s glass wall. They have an arrangement of tables outside – next to the swimming pool . Indoors is equally exciting with a very feel “edgy”. They have lightbulbs hanging from the ceiling, geometric-patterned cushions and also a brushed metal bar area.

Food here is great, the kitchen prepares the food that is delicious. The chilli prawn starters are crisp and spicy, the Thai beef salad and Vietnamese noodles are well made. The wagyu beef burger is served alongside some of Dubai’s best chips. The triple cooked chips are divine as they’re chunky, salted and crunchier from the outside, and softer than marshmallows in the middle. Lah Lah is one of the places to visit. Zabeeel House is a step into Jumeirah’s new upscale-casual hotel experience. Zabeel House by Jumeirah is located at Al Seef, creates a new hotel experience on the banks of Dubai Creek.

Zabeel House by Jumeirah Al Seef is the first hotel in Jumeirah’s new ‘Upscale-Casual’ collection. Guests will step into two contemporary retreats, creatively designed with some Insta-worthy quirks, relaxed restaurants and a rooftop pool; and step out to one of Dubai’s most exciting neighbourhoods. Al Seef is the newest destination by Meraas, the masterminds behind The Beach, Box Park, City Walk and La Mer; a two kilometre promenade of shops, cafes and pop-ups on the south bank of Dubai Creek. Old with new concept can be seen on the waterfront, with modern and imaginative architecture blending into charmed heritage that creates a fresh reason to visit the part of the city where Dubai’s story began.

Zabeel House by Jumeirah is the second hotel to launch at Al Seef, which is operated by Meraas and brings together elements of Dubai’s past and present in one of the city’s most historical districts. The new hotel is more than the usual five-star luxury that associates with Jumeirah Group, and at Zabeel House. Across the lobby is Nyon, a Mediterranean and Middle-Eastern restaurant serving a range of dishes throughout the day. On the seventh floor, the Sol Sky Bar sits on the edge of the hotel’s rooftop pool, and promises near panoramic views of the city and its magnificent skyscrapers.

Right from a design perspective, the hotel is the Cityscape feature, which portrays Dubai’s ongoing transformation. Jumeirah Group, the global luxury hotel company and a member of Dubai Holding, operates a world-class portfolio of hotels and resorts including the flagship Burj Al Arab Jumeirah.