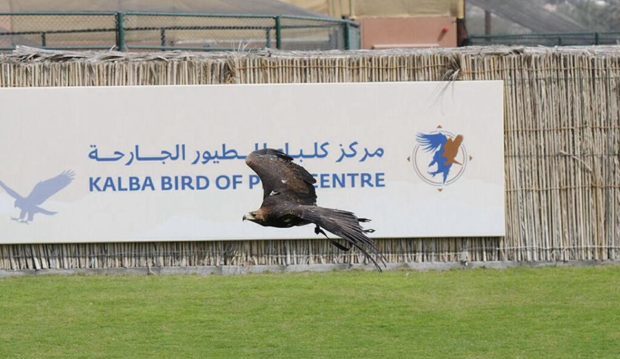 First of its kind

in the UAE and the Middle East Kalba Bird of Prey Centre was inaugurated in January 2014 by his Highness Sheikh Dr. Sultan Bin Mohammed Al Qasimi.

This is a dynamic and engaging facility in which visitors get to witness and experience the power of birds of prey in the Arabian Peninsula.
By using live demonstration and displays, the Kalba Bird of Prey Centre introduces visitors to host native raptor species. The centre highlights this historical landscape and its significance to the population of both resident and migrating wild raptors, like the Barn Owl, Short Toad Snake Eagle, Greater Spotted Eagle, and Lappet Faced Vulture. The Kalba Bird of Prey Centre also provide an educational tour by the centre’s guides to discover the different species of Raptor on display, their characteristics and adaptations. Through ongoing research and community wide education,

Kalba Bird of Prey Centre work towards conserving, protecting and maintaining suitable natural habitats for all birds of prey across the region.

When the falcon swoops towards the visiting group of children, it becomes a very exciting memory for all. Children and adults come visiting Sharjah’s Birds of Prey centre in Kalba, which was opened by the emirate’s Ruler, Dr Sheikh Sultan bin Mohammed Al Qasimi.

“Birds of prey are popular in Arabian traditions and this centre, that collects several local species, is like an education centre for the local people, their young generations and tourists,” said Gerald Tedd, the unit’s operation manager.

The Kalba Bird of Prey Centre employs a dozen staff, is now home to 46 species, from the barn owl and long-legged

buzzard to the short-toed snake eagle and lappet-faced vulture. So far, the birds have proved enticing to the community.

“The turnout has been good recently. The local communities and other Arab people can come again and again for different shows,” Mr Tedd said. “This is a very good addition to their entertainment.”

The Birds of Prey Centre is open six days a week, they also present live shows most evenings. The shows, around an hour long, focus on the hunting characteristics and habitats of the birds. Each Tuesday, the birds are given a rest from entertaining and educating the public. Children under 12 can visit the centre free of charge. Adult tickets are Dh50, while school groups are charged Dh5 per person.

“Kalba is located on one of the major avian flyways,” said Fatima Al Shamsi, director of communications and media

at the Environment and Protected Areas Authority (Epaa), which manages the centre. “These are aerial corridors that are used by many birds species to move to the south when it becomes too cold or when their food is getting scarce with the onset of the winter.”

The authority is also in charge to oversees the Mangrove Al Hafeya Protected Area. It is among the 2,169 Ramsar sites worldwide. The Ramsar Convention is an international treaty for the conservation and sustainable utilisation of wetlands.