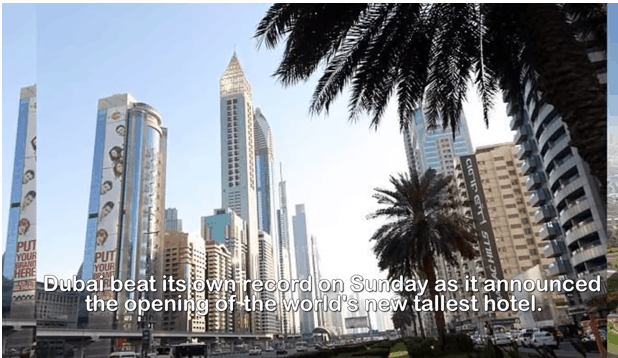 in the world is The Gevora Hotel on Sheikh Zayed Road. Officially it has won over the JW Marriott Marquis Dubai top spot and now it’s been made official by Guinness World Records.

The Gevora hotel, measures an overwhelming 356m and consists of 75 floors, 528 guestrooms and three pools. It is one metre taller than the preceding record holder, and has now taken the official title after being recognised by Guinness on February 9.

The hotel will have a speciality coffee shop, Le Veron, Gevora Kitchen will be serving international and local delicacies from a buffet and an à la carte menu. The brand will be ready with three more restaurants all set to open, including a pool lounge, a rooftop lounge and a Middle Eastern restaurant.

The hotel opened its doors on February 12, promising the “best of Middle Eastern hospitality and exclusivity”. Gevora Hotel also features a health club and a gymnasium with state-of-the-art facilities and a separate women’s-only area. The new Gevora Hotel on 101 Sheikh Zayed Road has opened the rooftop and it costs Dh100 for adults and Dh50 for those aged 6 to 12 to go up to the top of the hotel (children under 6 can visit for free). The viewing deck is open from 10:00 to 21:00 daily, and all who buys a ticket can then have a

The hotel features a Guinness World Records plaque that reads ‘The Tallest Hotel in the World’ in its lobby. The magnificent golden tower took four years to build. The hotel has a vigilant security teams at the hotel to ensure that no daredevils attempt to climb the exterior of the hotel or perform any stunts.