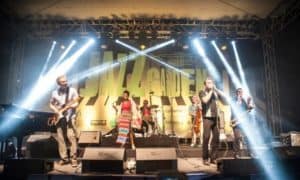 will enjoy 3 days event at Dubai Media City Amphitheatre starting 21-23 February, as the Emirates Airline Dubai Jazz Festival returns for its 16th edition. Visitors can witness a spectacular line-up of international bands and singers taking to the stage over the three days.

To begin with, the first day of the festival will feature British rock band Duran Duran, who’ll be performing some of the biggest hits from their forty-year-career, including ‘Rio’ and ‘Hungry Like The Wolf’. Music lovers can also enjoy music from their latest album, Paper Gods. They’ll be joined by Renegade Brass Band, a 12-piece band from the UK that play R&B tunes with a full brass band.

On the second night, on Thursday 22 February, will be the ten-time Grammy Award-winning artist John Legend, whose hits including ‘Green Light’, ‘Glory’, and ‘All of Me’. He’s supported best-selling artists including Kanye West, David Guetta, and Alicia Keys. Supporting John Legend will be US singer China Moses, whose music is a combination of jazz, soul, and R&B.

Latin music star Ricky Martin is going to close the festival on 23 February. He is all set to make his debut performance in Dubai, and fans can expect to see him performing his biggest hits, including ‘Livin’ La Vida Loca’, ‘Vente Pa’ Ca’, and ‘She Bangs’. Martin is known for making music since he was 12, when he joined the Puerto Rican boyband Menudo, and he’s sold more than 70 million albums around the world. Also performing on the Friday night will be Poncho Sanchez, the Grammy Award-winning Latin jazz musician.

Launched in 2003, the Emirates Airline Dubai Jazz Festival or Jazz Fest as it is commonly known now, has fascinated thousands of music lovers over the years. The upcoming 16th edition of the Jazz Fest has been organised after years of conducting successful event and also by creating a one-of-a-kind experience for fans and artists alike.

This music festival began in 2003 as a 3-day mainstream jazz festival selling 1,200 tickets for the 1st edition and since the 2nd edition, the numbers have

doubled and tripled. In 2014, the festival was attended by more than 60,000 attendees for the whole 9 days. And in 2015 the festival got back to its base in Dubai Media City with a 3 sold out nights with more than 35,000 music fans over the 3 nights. The Emirates Airline Dubai Jazz Festival 2016 will also see music lovers flock the venue in large numbers.

The event will have food outlets for everyone including top restaurant brands.