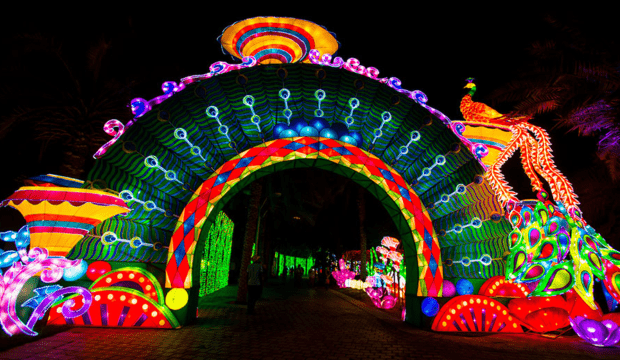 Garden Glow shines bright again! Attraction ready to welcome visitors as it reopens with Glowing Safari theme, Ice Park and Art Park. Located at Sheikh Zayed Road , people can visit after hours and find out about a park that is attractive with dazzling Dubai Garden Glow as it has reopened.

Dubai Garden Glow reopened on Sunday, October 7 in a ceremony hosted by Mohammed Mubarak Al Mutaiwei, CEO of Dubai Municipality for Business Development Sector. This wonderful world is the biggest themed garden on the planet and was unveiled by Dubai Municipality.

Returning back for the fourth year, the massive attraction promises to be bigger and shinier than ever. The talented designers have introduced three new themes to the park: the Glowing Safari features various innovative animal sculptures, the Ice Park boasts creations made from more than 5,000 tons of ice and there is a brand-new Art Park, which is made from used bottles, plates and CDs.

ubai Garden Glow in Zabeel Park modifies its main theme each year. It was inspired from the Wonders of the World, returned for the second year by paying tribute to nature and last year it celebrated the underwater world. Dubai Garden Glow was inaugurated on December 23rd, 2015 and continued until April 30th, 2016 and will be back in October 2016 with new attractions. This family entertainment destination is popular across all ages offering new experience of a lifetime!

For this season, Dubai Garden Glow it created a cool oasis in the middle of the desert with sculptures carved in ice. About 5,000 tonnes of locally made ice was used to craft Dubai landmarks, Arctic animals and exotic structures. Sculpting art: The artist can be seen with a chisel creating delicate features into the mythical dragon. Also Burj Khalifa, the world’s tallest tower, and Brontosaurus, is one of the largest dinosaurs and features here.

Their mega show – the glow garden was also transformed into a riotous world of lights and colours, replacing the old with a variety of new and intriguing installations. Each and everything from the Colourful World and the Sea World to the Happiness Street and Candy Land was built from scratch. Close to five hundred men and women worked together to put up the grand show at the garden. More than 10 million LED lights were used to make the garden glow this season. Artists had taken about three months to painstakingly build these intricately designed structures that shine bright at night. The attractions from the oil rigs to the water set are all handmade. With five tonnes of recycled fabric was shaped into delicately crafted designs and patterns across 100 acres. Through its art installations inspired by nature and wildlife, Dubai Garden Glow spreads the message of protecting the environment.

As a tribute to Dubai – one of the most significant installations this year at Dubai Garden Glow is the famous hand sign of His Highness Shaikh Mohammad Bin Rashid Al Maktoum, Vice-President and Prime Minister of the UAE and Ruler of Dubai. The feature signifies win, victory and love.

The new addition has been carefully created to attract attention to global sustainability and recycling and adds to Dubai’s booming tourism sector. Dubai Municipality are expecting to draw in more than 500,000 visitors this season, which will run for six months until April.