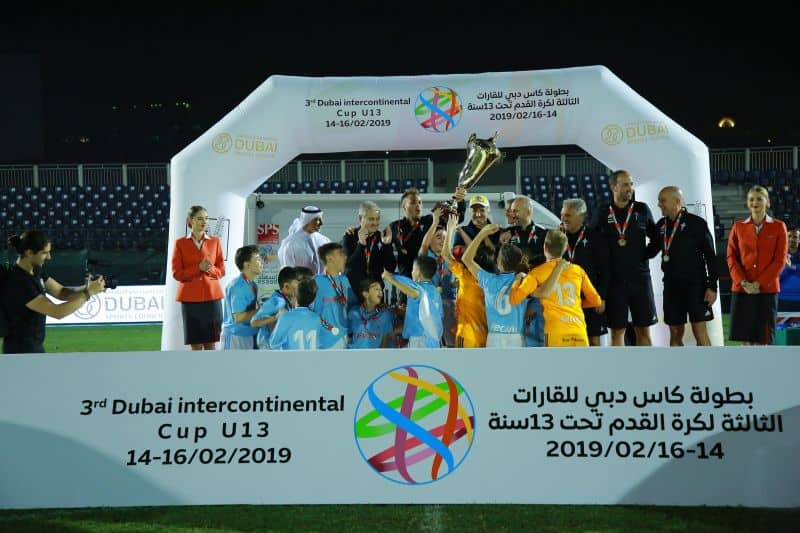 Celta Vigo down Juventus to win Dubai U13 Intercontinental Cup

Celta de Vigo, winners of the first edition, lifted the trophy for a second time on Saturday night. They defeated Juventus 1-0 in the Gold Cup final of the 3rd Dubai Under 13 Intercontinental Cup Football Tournament.

During the semi-final, Celta Vigo defeated Barcelona 2-0, while Juventus prevailed 3-2 over FC Twente of Holland.

In the playoff for third place, Barcelona defeated FC Twente 3-1, while Al Ahly of Egypt edged Italy’s Levante Azzuro on penalties in the Silver Cup final following a 1-1 draw.

Celta Vigo had won the inaugural edition of the tournament in 2017, defeating Real Madrid 1-0 in the final. Real had come to the final last year as well, but lost 3-2 on penalties to Lizzy Sports Club of Ghana following a 1-1 stalemate.

Real, however, failed to reach the last four this time, losing on penalties to Juventus in the quarterfinal after a 1-1 draw.

“It has been a fantastic weekend of football here at Dubai Sports City – you can see all the teams have really enjoyed themselves and learnt a lot along the way,” said Salgado, a former Spain international and Real Madrid legend.

“This year we saw five local UAE teams –Al Nasr, Al Wasl and Shabab Al Ahli Dubai, Al Wahda and Al Ain – participate in the tournament and I am sure all of them will take a lot of positives from their participation over the past three days.

“I am sure many of the players we saw in action here will go on to represent their clubs and their countries, and win many titles with them.”

Conducted under the aegis of Dubai Sports Council, the 3rd Dubai U13 Intercontinental Cup had attracted 20 teams from five different continents, and the list included top European clubs Real Madrid, Barcelona, Chelsea, Juventus, Celta Vigo, FC Porto, FC Twente of Holland and Levante Azzuro. Egypt’s Al Ahly and a team from Cairo, along with a Tokyo Select All Star team and JEF United Chiba from Japan, Australia’s Pascoe Vale FC, and the Canadian Academy of Futbol also participated from the overseas teams.