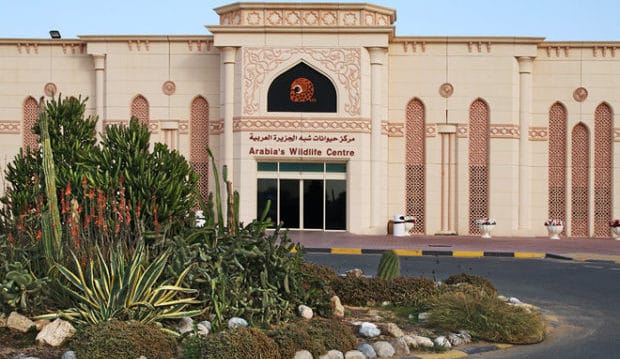 Wildlife Centre was established on 1999 by His Highness Dr. Sheikh Sultan Bin Mohammad Al Qasimi, Member of the Supreme Council of the United Arab Emirates, the Ruler of Sharjah. Considered to be the very first learning centre, it is located in a protected area.

Arabia’s Wildlife Centre provides opportunities to discover the remarkable diversity of indigenous fauna found on the Arabian Peninsula. Accommodating arguably the largest collection of Arabian wildlife in the world the Centre is also home to representatives of many species which are extinct in Arabia. They showcase the urgent need to conserve the environment to ensure the sustained survival of this significant part of Arabian heritage.

Reptile & Insect House:
A large number of local snakes including Saw-scaled Vipers, Puff Adders and Arabian Cobra can be seen in display living in their natural surroundings. Along with the snakes many lizards, freshwater fishes, amphibians and insects are also on display.
Aviary:

A walk through aviary with mountain, desert and aquatic habitats is home to many species of indigenous birds including; weavers, partridges and Houbara Bustards. The pathway through the aviary also leads you into a cave where Egyptian fruit bats and Omani blind cave fish can be spotted and past three small carnivore enclosures.
Nocturnal House:
Here the day-night cycle has been switched so that the many nocturnal species including foxes, genet, mongoose, wildcat, Honey Badger, hedgehogs, porcupines and other rodents can be seen.
Cafeteria & Viewing Area:
Offering a spacious comfort, this restaurant provides panoramic views of the large antelope exhibit where Arabian Oryx, gazelle and Ostrich roam. Nubian Ibex, Greater Flamingo can be seen on the mountain and in the moat which surrounds it.

Large Carnivores & Primates:
This section is has five large enclosures which are home to Hamadryas Baboons, Cheetah, Arabian Wolf, Striped Hyaena, and of course the Arabian Leopard. Each species is housed in their natural environment, without a fence in sight.

Visitors enjoy the entire experience right from the comfort of the climate controlled environment inside the Wildlife Centre; offering the most ideal destination for a family outing, even in summer. During the journey through the Wildlife Centre information panels and recordings along the way offer information about each of the species on display, ensuring that visitors have a greater understanding, and hopefully a new found appreciation, of the terrestrial biodiversity in Arabia.

Member of the Supreme Council, Ruler of Sharjah, inaugurated the Natural History Museum in November 1995. The museum is a venue to provide visitors an opportunity to learn about the flora and fauna of the Arabian Desert. It became a centre of knowledge and entertainment for people of different ages and for research centres for various critical and scientific purposes.
The opening of the botanical Museum was on March 6 2008. It was the first of its kind in the Middle East. It shows a timeline of plant life from million years ago to the present time in an interesting theoretical and practical way. The museum also shows the importance of plants to humans and other creatures since the old ages.