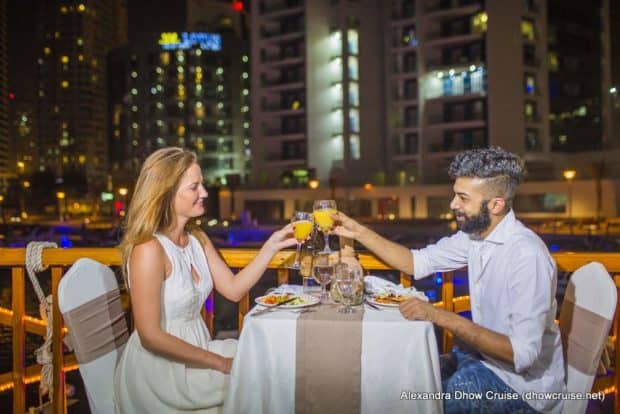 Offering top rated Daily Dinner Cruise in Dubai Marina their daily cruise includes full course buffet, live singer and tanura dancer onboard. Alexandra is a 90 foot traditional Dhow made from teak wood, refurbished into a floating restaurant. Onboard “Alexandra” clients can enjoy two live acts – a singer and dancer. The ‘tanura’ dance show is a folk dance program which consists of constant rotations that are mixed with various patterns and designs of the intricately designed dress. Their talented singer Natalia starts of the evening with some soft music in the style of pop, rock, jazz and even some classical pieces.

A “Dhow” is a traditional wooden vessel that is common in the Middle East and has been used historically for a variety of purposes, primarily for trading. Dhows are hand made in a number of sizes and in the UAE have been most used

for trade between UAE and Iran aswell as for pearl diving. In recent times the demand for dhows has gone down and has been replaced by more modern vessels. Nonetheless, Dhows have and will play a crucial role in the history and evolution of the gulf and are iconic as a mode of sea transportation. In the last few decades, a lot of the ‘Dhows’ have been refurbished for tourism purposes, one of them being dhow cruise dinners.

In the 90’s era, a few entrepreneurs got together and converted the larger dhows that were traditionally used for trading into refurbished floating restaurants that would operate dinner cruises in the Dubai Creek. That innovative segment has grown and over many years has evolved into a rather important and iconic type of tourist attraction in Dubai. Right with only handful of Dhows in early 90’s the segment has grown into over 30

dhows in the Creek and 8 in Dubai Marina. One the elements of the Dhow Cruise ‘culture’ has been to have live entertainment onboard in a variety of forms. Earlier, belly dancing was most common, but with time, Dubai Government has been eliminating this form of entertainment and has now been almost entirely replaced by ‘Tanura’ – a traditionally Turksih dance that is usually performed by a male dancer that is spinning in a flowing and elaborately decorated dress, creating a very interesting sight.

Clients can come onboard Alexandra and have a pleasant ride. With entertainment, they have live performers and meticilous approach to food.