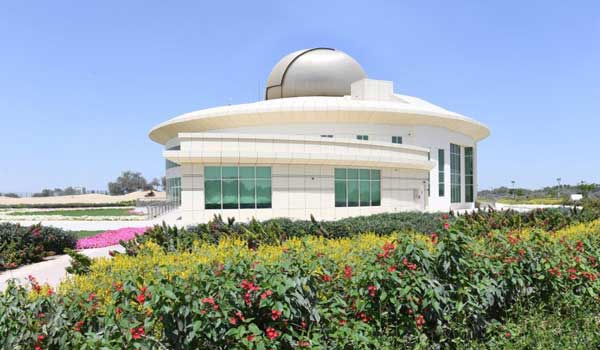 the year 2000, The Dubai Astronomy Group (DAG) encourages and promotes the study of Astronomy and its related fields in the Middle East region and beyond. Ever since its inception the group has not just grown in size but in stature.

In its current capacity, as consultant and specialist in its field, the Dubai Astronomy Group enjoys a variety of relationships at senior government and private sector’s levels. The Group is involved in a number of high profile infrastructure and future tourism projects. The team promotes astronomy in the Middle East region and the world, to support and encourage new talents in astronomy.

The team at Al Thuraya

Astronomy Centre understand that innovation is not a new concept today as according to a study 65 per cent of children in primary schools today take up work in jobs that don’t even exist today. Taking it as a responsibility to hone children’s creativity and provide them with the analytical skills that are required to meet productive ends. By encouraging and providing opportunities that enhance creative thinking the team hopes to develop the knowledge and skill set of children for a better future.

Al Thuraya Astronomy Centre had a soft opening on September 15 last year. The grand opening was on National Day, December 2. The centre is home to a telescope with a one metre diametre mirror. It has an academy with

classrooms and labs, an outside observation deck, a 100-seat theatre an astronomy shop, a cafe and an library. The 2,696 square building located in Al Mushrif Park has landscaped gardens in the shapes of constellations. Construction began in 2015.

The Dubai Astronomy Group currently has 7,000 general members and is in the process of recruiting 40 new employees for the new centre. The centre educates the public on the Mars 2117 Project, a national plan to build a city on Mars in one hundred years. Thuraya has become a place for everyone to come and meet together, it has lots of places where people come and enjoy themselves and create a road map to Mars.

Mohammed has given a mandate to go to Mars 2117 to build a Mars city. Sheikh Mohammed is a very visionary man and believes in developing it too. Mr Al Hariri envisions a Mars camp at the observatory that stimulates life on the Red Planet. He says: “We want to give people the chance to live on Mars. They will have no atmosphere, they will have no food, they will have no soil. They will have to prepare everything for themselves.”
With planning that has begun on the next project, the Marmoun Astronomy Resort, is a dark sky reserve 40 km away from the city, tourists and researchers can observe the skies in complete darkness. The municipality has designated land.

“We want to make it an astronomy resort so people can come throughout the year and enjoy the beautiful sky,” he said. “We are anticipating my 2018 we will have this available. At the moment it’s on the drawing board in collaboration with the municipality. We hope that to finalise it this year so we can start construction early next year.”
The next project will be an observatory in the Hatta mountains, with a tentative 2019 opening.

Mr Al Hariri was sharing his views on the sidelines of a desert viewing of the Perseids meteor shower in Marmoun desert south of Dubai.